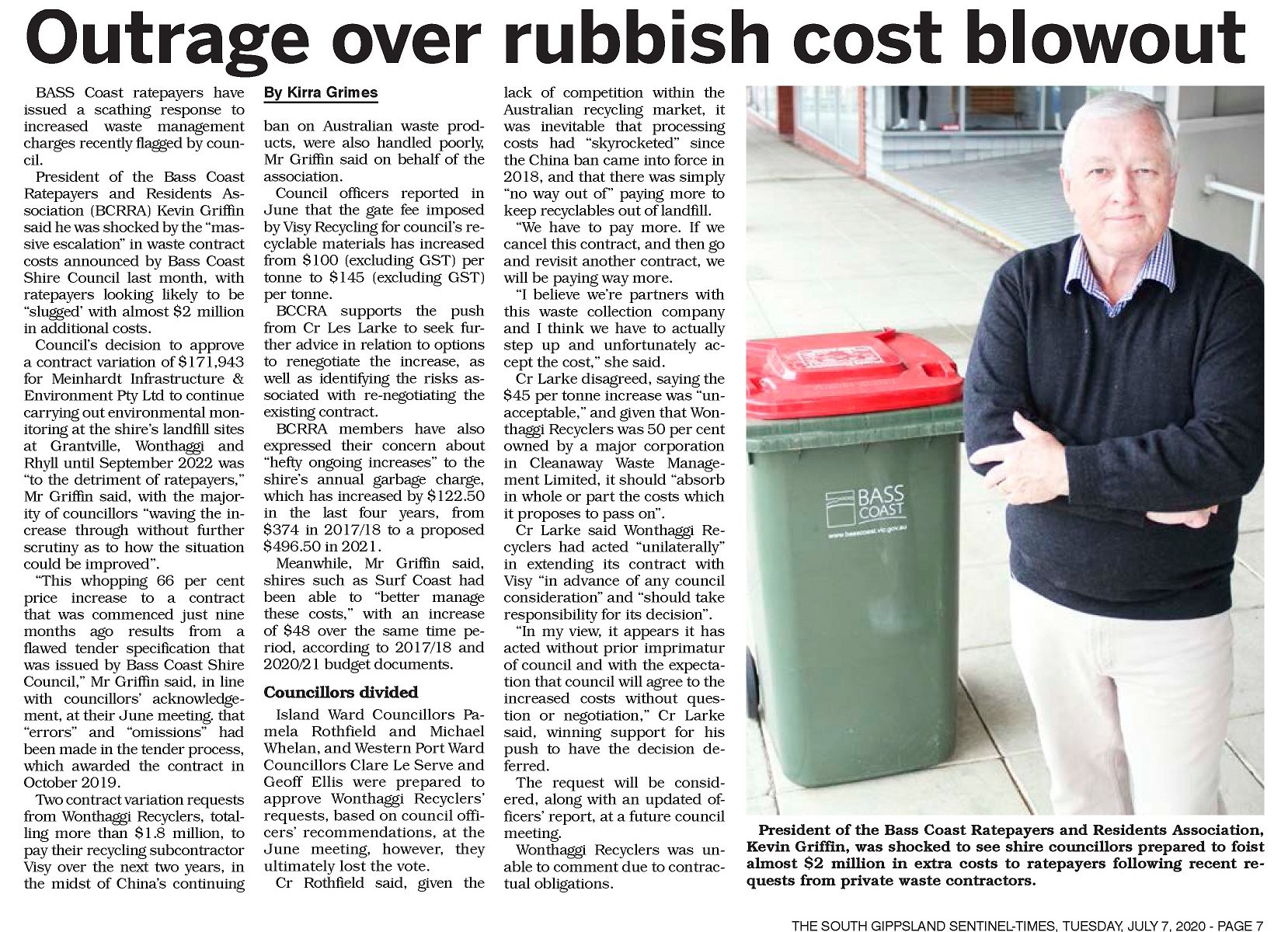 At the request of its members the Bass Coast Residents and Ratepayers Association (BCRRA) lodged a Freedom of Information (F.O.I.) request on the 1st June 2019, seeking details of the current Bass coast Waste Management Contract. Members had expressed concern on the yearly garbage rate increases. The yearly garbage rate has increased from $374 in 2017 to $496.60 in 2021 an increase of $122.60 or24.7% over 4 years

Increases in adjacent shires have been.

The justification from Bass Coast council for such a mammoth increase is the tonnage rate increase charged by the recyclers due to no more offshore recycling to China and Indonesia.

BCRRA and council have had several meetings in determining what documents we have requested. At the last meeting on the 17th February 2020 it was agreed that the outstanding contact tender documents and other outstanding information requested would be forwarded to us by the end of February 2020. This did not happen, and BCRRA have still not received the promised contract documents to enable BCRRA to evaluate the Waste Tender.

BCRRA wrote to the C.E.O Ali Waste on the 20th June to have the outstanding documents released, so that BCRRA can evaluate the waste budget and the proposed garbage increases to the Bass Coast ratepayer of $46.60 and enable BCRRA to make an informed submission to this year’s budget.

As at July 1st 2020, more than 12 months since submitting our FOI request, BCRRA have only been given a copy of the Bass Coast Waste Management Strategy 2015 to 2025 (already publically available via Council’s website) and the Bass Coast Shire Tender documents for Waste Facility Management and Operation Services.

Despite several assurances that we will be given documents as agreed, Bass Coast Shire Council has failed to deliver. BCRRA will continue its efforts to hold Council to account and keep their promises.

We should add that both Cr Michael Whelan* and Cr Stephen Fullarton* both showed in letters written to the Philip Island & San Remo Advertiser, their belief that the community should be shown what the Council agreed to with the Waste Contract approved in 2016 behind closed doors, by making them public documents.

Our group sincerely hope the sentiments given then, while they were canvassing to be elected to Council in 2016 are still valid today.